Warning: "continue" targeting switch is equivalent to "break". Did you mean to use "continue 2"? in D:\HostingSpaces\MalcolmSm1th\blog.ukhorseracing.co.uk\wwwroot\wp-includes\pomo\plural-forms.php on line 210
 Three Well Bred Maidens – UK Horse Racing

The first is from the (all too) early 1.35 Musselburgh.
It’s a maiden race and, as ever, the best way to look at these is via the Koulds Scores method.

Two horses stand out here with the Koulds Scores which looks at the histories of each horse’s siblings which are Roland Rocks and Jive Lady which have Scores of 17 and 12 respectively.
Note that no other horse in the race has any Koulds Scores at all which means that all of the siblings of the other horses are, frankly, quite poor. Not one sibling of the other horses has managed to win anything which is quite astonishing.
So, it’s now easy to find an angle into this maiden race: one quite simply has to back both Roland Rocks and Jive Lady.
The result?

If one had the foresight to do the Exacta then that would have paid out at over £200 for a £1 stake!
I managed to get on at SP just before the off and, thus, made nineteen points on that race bagging Roland Rocks at 20/1.
On the forum I then pointed out two more maiden races where the Koulds Scores indicated something special.
The next up was the 3.05 at Downpatrick.

Again two horses spring out here. The first was Thinkinginmysleep and the second being Caerleon Kate.
Having a little more time this time (having racing at just past half past one in the afternoon is far too early, one hasn’t got rid of the taste of toothpaste by then) I placed SPs on Betfair and getting over 360 on Caerleon Kate and over 100 on Thinkinginmysleep.
Caerleon went odds on in the photo and having seen so many photos go against me, as this one did, I decided to lay at evens and I came out with a nice winner, after Betfair commission, at 177/1. 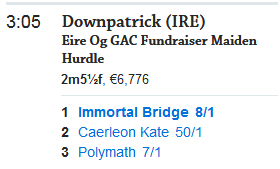 Which isn’t too bad for a horse that didn’t win.
Third race was the 4.40 at York and again two more stood out in this maiden. 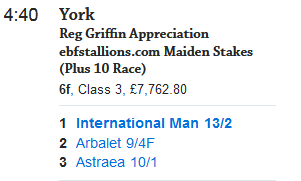 So there you have it. Three Well Bred Maidens and an extremely profitable day indeed.