There are no such selections today but yesterday we had three.
As expected with this method of selection some win, some run decently enough, some dreadfully and some are still meandering out there on the back straight when the sun goes down.
Yesterday we had all but a winner but one really close call.
The first was in the Sedgefield 2.10 and one can see why Medal Of Freedom was selected here.

Medal Of Freedom was clearly the horse with the Class Differentials and also a positive Weight Differential. It was available at 20/1 with Paddy Power early doors and set off at 7/1. According to the reports it was a little clumsy early doors but three out was in with every chance.
The next of the three was Northern Emperor in the Wexford 6.05. 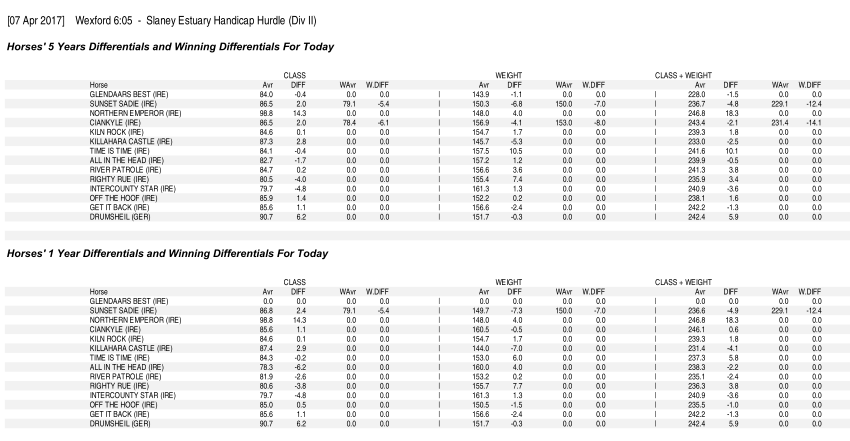 Looking back at this, in the cold light of day, this doesn’t look so impressive after all, does it? Whilst it is the best in terms of Differentials in this race it hardly knocks one’s socks off, does it?
Northern Emperor was in touch with the leaders when the horse was hampered and the rider was shoved off the saddle. We don’t know how it would have fared if it had continued but it was avaible readily enough at 33/1 in the morning but went off at 16/1.
In hindsight it wasn’t the strongest of selections.
The last of the three, in the Dundalk 7.55, was USA which opened at 33/1, available at 50s on the exchanges and went off at 20/1. This one was a clear enough selection.

The five year Differentials aren’t easy to pick through as the report generator skipped a tab-space in printing but the one year figures tell an interesting story.
The Class Differential was a good strong 11.2, the best in the race, but the Weight Differential was simply out of this world; 37. This means USA is running almost three stones in terms of class and weight lower than the average and available at around 50/1!
It didn’t win, but went to 1.11 in running and only just lost by a head. The report says Slowly away, raced towards rear until progress on inner under 2f out, went 3rd entering final furlong, stayed on strongly to press winner in 2nd close home, just held (op 33/1).
So, whilst there was no joy with these three selections yesterday the principle, it has to be said, remains sound.